by admin
in News

Coincidentally, the victories came together when the president was forced into isolation after contracting COVID-19, moving him out of the spotlight.

Biden, who is fully vaccinated and twice boosted, first tested positive for COVID-19 July 21 and isolated for five days. He tested negative on July 26 and returned to work physically the next day, but then again tested positive July 30 in what’s described as a “rebound” positivity case.

Ultimately, the president has spent a total of two weeks in isolation – but has emerged with a win in the fight against Al-Qaida and a number of key legislative triumphs.

The president’s success during isolation is not a one-off. As The Washington Post’s Tyler Pager pointed out during a press briefing on August 2, Biden won the 2020 election through “mostly working from his home.”

“This has been one of the most successful weeks of the president’s tenure in the White House so far. I’m wondering if it’s just a coincidence that it’s happening while he has largely been isolating in the White House?” Pager asked, prompting White House press secretary Karine Jean-Pierre to refer to the idea as “cynicism.” (RELATED: Reporter Asks If It’s A ‘Coincidence’ That One Of Biden’s ‘Most Successful Weeks’ Happened During His Isolation Period)

Despite the White house dismissing the idea, NY Post opinion columnist Michael Goodwin shared the same thought. In a piece published August 6, Goodwin argued that “less Biden just fine with Dems,” using the series of political wins over the past two weeks as the reason why.

Four days into his initial isolation period, the president quietly – and virtually – met with a small group of top officials and national security advisers regarding an operation that had been planned for months.

The operation was centered around Ayman al-Zawahiri, the leader of Al-Qaida who, as the U.S. discovered, had recently moved to a safe house in Afghanistan with his family. Though Biden couldn’t attend the July 25 meeting in person, a senior administration official later told reporters that he “pressed” his team “at a granular level.”

At the end of the meeting, Biden made a critical decision: Move forward with an air strike against al-Zawahiri’s location.

The operation, senior administration officials told reporters during a background call the following week, was conducted at 9:48 p.m. Eastern time July 30 – or 6:18 a.m Kabul time July 31 – and carried out “by an unmanned aerial vehicle.”

Though Zawahiri never appeared to leave the compound, he’d often appear out on a balcony inside the grounds, a senior administration official explained. Ultimately, the U.S. government was able to kill Zawahiri while he was on that balcony, with officials stating no one else died as a result of the air strike.

On August 1, a few days after the successful strike, Biden addressed the nation about the successful mission. Still suffering from COVID, the White House set up cameras on the Blue Room Balcony while a small group of reporters looked on from a distant open window, according to CNN.

“No matter how long it takes, no matter where you hide, if you are a threat to our people, the United States will find you and take you out,” Biden declared during his speech.

The Senate first passed the CHIPS–Plus Act among a bipartisan 64–33 vote on July 27, the same day that Biden left isolation following his first bout of COVID. The House also passed the bill on July 28, sending it to the White House for Biden’s signature, according to CNBC.

Despite a large push by Republican leaders in the Senate to vote on, the massive piece of legislation ended up earning the backing of 24 Republicans, CNBC reported.

Biden had long pushed for the bill to pass, urging Congress in January to “pass this bill right away and get it to my desk,” Bloomberg reported at the time. His administration touted the bill as a way to improve domestic chip manufacturing amid an ongoing shortage and as a bigger push from the White House to build up U.S. infrastructure and create manufacturing jobs.

“The CHIPS and Science Act is exactly what we need to be doing to grow our economy right now,” Biden said in a statement on July 28, shortly after the bill’s passage. “By making more semiconductors in the United States, this bill will increase domestic manufacturing and lower costs for families. And, it will strengthen our national security by making us less dependent on foreign sources of semiconductors.” 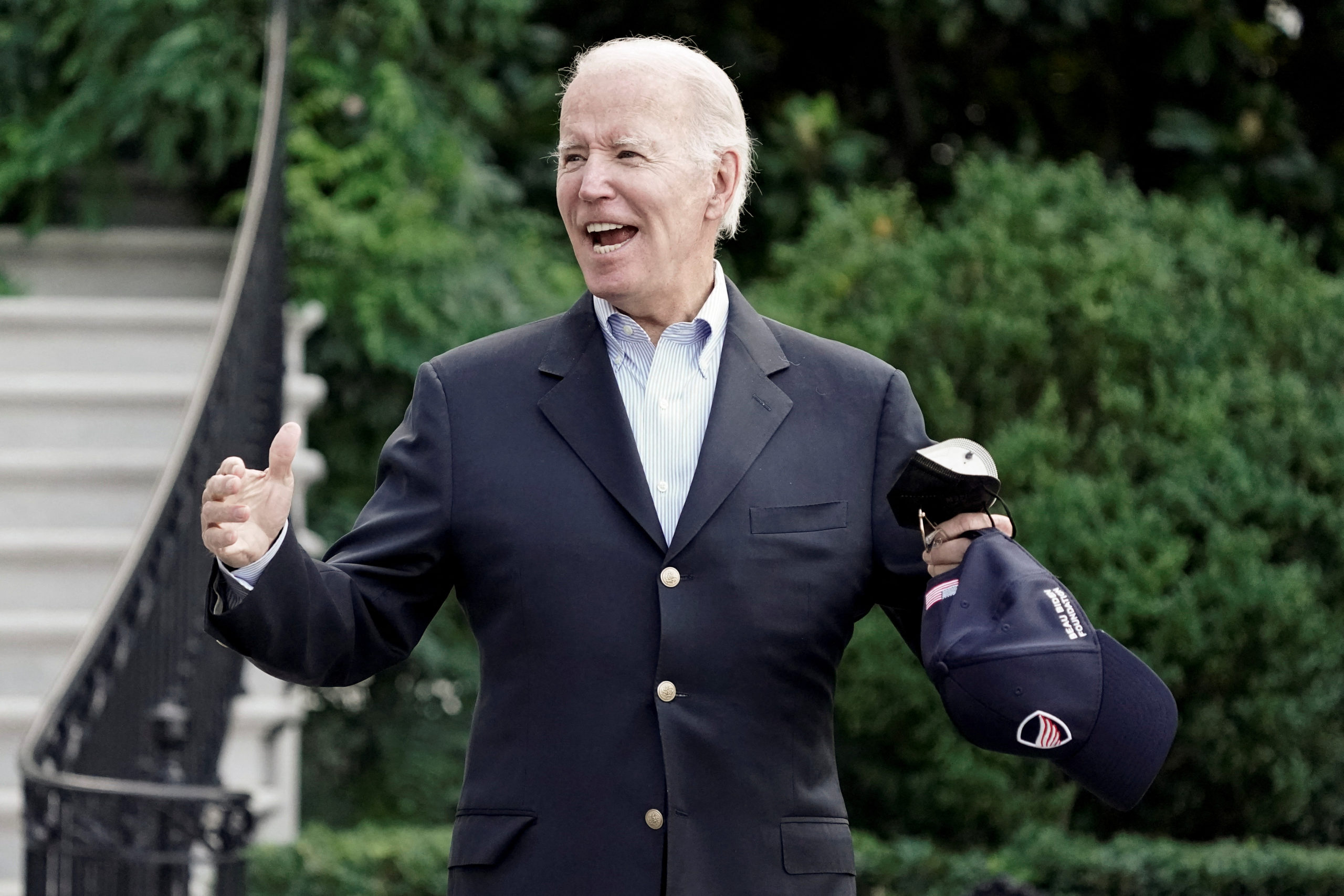 U.S. President Joe Biden gestures to the media as he walks towards Marine One for departure to Rehoboth Beach, Delaware from the South Lawn of the White House in Washington, D.C., U.S. August 7, 2022. REUTERS/Ken Cedeno

Days after the CHIPS victory, however, Biden was back in isolation after testing positive for COVID-19 again – but Congress was busy working to pass another piece of bipartisan legislation that the president could tout as a win for his agenda.

The second bill, dubbed the Sergeant First Class Heath Robinson Honoring Our Promise to Address Comprehensive Toxics (PACT) Act, previously passed the House in July and the Senate in June. Due to a technical issue, the Senate re-voted on the bill as a number of Republicans blocked the bill in an effort to address mandatory spending.

Veterans protested at the U.S. Capitol, calling on Congress to move the legislation forward. The bill ultimately passed the Senate August 2, paving the way for veterans exposed to toxic substances in the line of duty to receive care.

“I called for this legislation in my State of the Union address, as part of my Unity Agenda to help bring together our nation,” Biden noted in a statement, crafted mid-quarantine, after the bill passed. “Congress has delivered a decisive and bipartisan win for America’s veterans.”

“I have long said we have a lot of obligations as a nation, but we have only one sacred obligation – to prepare and equip those we send to war and to take care of them and their families when they come home,” Biden added.

The Biden administration’s wins mid-isolation were not limited to bipartisan bills. The Department of Labor (DOL) July jobs report, released August 5, revealed that the U.S. economy added a whopping 528,000 jobs.

This number, shown in the DOL data, was double the 250,000 number economists had projected.

Biden highlighted the report as being “the result of” his “economic plan.”

“That’s millions of families with the dignity and peace of mind that a paycheck provides,” the president wrote in a statement. “And, it’s the result of my economic plan to build the economy from the bottom up and middle out. I ran for president to rebuild the middle class – there’s more work to do, but today’s jobs report shows we are making significant progress for working families.”

Though it wasn’t the original Build Back Better Act, this version of Biden’s agenda – dubbed the Inflation Reduction Act – still had a number of wins for his administration, including almost $370 billion in tax credits and green energy subsidies and a 15% tax on corporations with a reported annual income of over $1 billion.

This version also had something that Biden’s Build Back Better Act lacked: the support of Democratic West Virginia Sen. Joe Manchin. The West Virginian senator had previously declined to endorse the bill in December 2021, stating that “if [he] can’t go home and explain it to the people of West Virginia,” he could not vote for it, according to CNBC.

With Manchin on board, as well as another deal struck with Democratic Arizona Sen. Kyrsten Sinema, Democrats in the Senate quickly worked to pass the bill.

After a nearly 15-hours long debate that began on Saturday and went through the night, the legislation passed the Senate with a 51-50 party line vote. Vice President Kamala Harris passed the tie–breaking vote on Sunday – the same day that Biden was officially released from his lengthy isolation.

The bill still needs to pass the Democratic-controlled House before heading to Biden’s desk, but Senate passage was viewed as a major obstacle. Biden swiftly touted the bill after the Senate’s vote, writing in a statement that “the House should pass this as soon as possible” and expressing his excitement at “signing it into law.”

With a fresh batch of wins coming after a series of losses and hurdles, Biden emerged from the White House on Sunday morning feeling confident. The president told reporters he was feeling “great” and expressed optimism that the Inflation Reduction Act would pass.

And then, after 16 days of isolating at the White House, Biden boarded Marine One. The destination?

One of his favorite weekend spots: His beach house in Rehoboth, Delaware.

No Result
View All Result